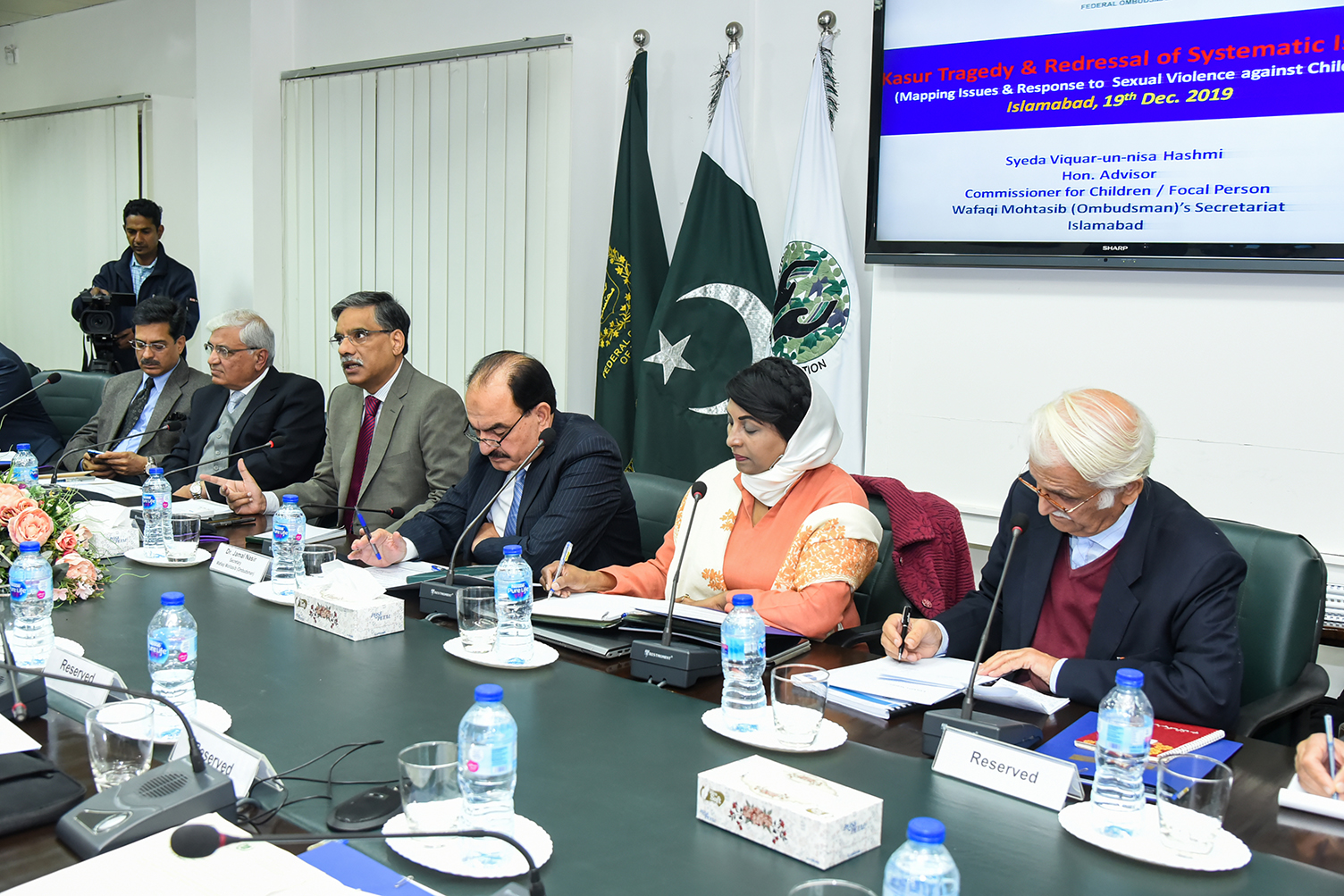 Address of Federal Ombudsman in National Consultative meeting on abuse of children.

Federal Ombudsman Syed Tahir Shahbaz has said that the present environment of the society is unsafe for the children.  He said that collective efforts of parents, educational Institutions and the government can resolve this issue.  He said that the abuse of children is a big issue and needs to be addressed at greater level. He emphasized to strengthen the institutional mechanism for children protection in the country.  He was addressing in a broad-based consultative meeting on strengthening institutional mechanism for children protection in Pakistan. This meeting has been arranged by the National Commissioner for Children (NCC) of Wafaqi Mohtasib Secretariat.  The meeting was attended by Parliamentarians, Ministry of Interior, National Commission of Pakistan and NGOs.  The consultation meeting deliberated upon formulating a practicable way forward for prevention of violence and control of crimes against children and rehabilitation of victims of sexual abuse in society.

Honorable Federal Ombudsman in his opening remarks appreciated the commitment of the participants with the cause of protection of children’s rights in Pakistan which inter-alia aimed at rooting out menace of sexual violence against children from society. He underscored the need to chalk out a strategic plan of action in this regard and assured that this institution will play a fully supportive role in resolving the issues of children.

National Commissioner for Children Mr. Ejaz Ahmad Qureshi in his remarks while highlighting major activities of his office made a recommendation for establishment of a parliamentary committee with the portfolio of safeguarding rights of children.   Syeda Viqar un Nisa Hashmi, Commissioner for Children presented a report on Kasur Tragedy & Redressal of systemic issues and highlighted the major issues of sexual violence against children.

Senator Farhat Ullah Babar and persons representing diverse segments of society, including parliamentarians, high ranking officials of the Government of Pakistan, human rights and child rights activists, and representative from the Child Protection Section of the UNICEF contributed in the consultations.

The meeting was part of a process initiated by the Office of the National Commissioner for Children for developing recommendations for legislative and administrative measures regarding strengthening of child protection institutional mechanism in Pakistan.  A similar consultation meeting was held in Lahore on the 27th of November 2019 and another is scheduled in Quetta during the current month.