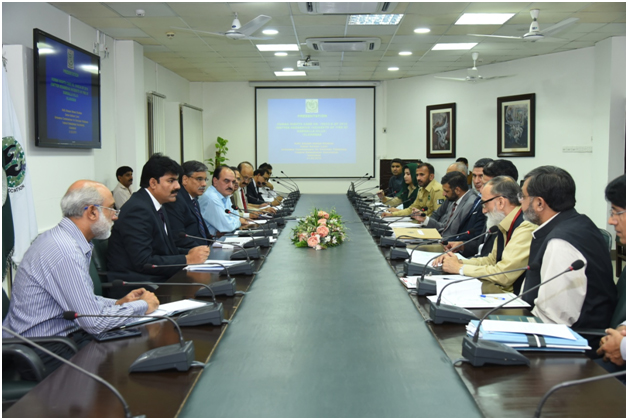 Syed Tahir Shahbaz, the Federal Ombudsman has showed serious concern on lack of coordination among MCI, IWMB, MOI and other agencies to control fire incidents on Margalla Hills National Park.  He stressed to make coordinated efforts among these agencies in the light of Wafaqi Mohtasib recommendations already endorsed by the Supreme Court of Pakistan.  He also emphasized to improve reporting mechanism of fire incidents at Margalla hills.

Previously, in pursuance of the orders of the Supreme Court of Pakistan dated 25-06-2018, the Hon’ble Ombudsman after a series of meetings with CDA, NDMA, Municipal Corporation Islamabad (MCI), Islamabad Wildlife Management Board (IWMB) and M/o Interior had made recommendations and suggested measures to prevent incidents of fire at Margalla Hills.  It was recommended that MCI, CDA, IWMB and NDMA should work together to develop SOPs to ensure coordination in order to avoid such incidents. It was also directed that Ministry of Interior would hold a monthly meeting of all the agencies and submit its report to the Ombudsman secretariat.  It was directed to submit annual fire control plan to the Ombudsman Secretariat. It was also recommended that MCI would equip its pickets on modern lines to control the incidents of fire along with presence of sufficient staff and submit it report.

The meeting was chaired by the Hon’ble Federal Ombudsman Syed Tahir Shahbaz, and the representatives of MCI, NDMA, CDA, IWMB and Ministry of Interior attended the meeting.  Hafiz Ahsaan Ahmed Khokhar, Senior Adviser briefed the meeting on the recommendations and the earlier decisions taken by the Federal Ombudsman on the issue.  The rep. of MCI informed that two weeks ago three incidents of fire had occurred, which were resolved with the timely action by the MCI.   He also informed that 400 employees had been recruited for the 32 pickets.  He also informed that two vehicles had been given by the NDMA to meet the emergency situation at the Margalla hills.  The Ombudsman asked that as per SOP, the MCI had to share report of every incident with the other agencies and share the same with the Ombudsman Secretariat but unfortunately no report was shared with any agency.  The IWMB complained that the
MCI had not taken it on board, therefore, it had no information about the incidents.  The Federal Ombudsman showed great concern on the casual attitude and poor coorination of MCI with the other agency.

The Federal Ombudsman after hearing all the agencies directed the Ministry of Interior to hold a coordinated meeting of all agencies on the coming Friday and streamline all measures taken by all agencies to prevent fire at Margalla hills.  He also directed to MCI to submit the reports of three incidents fire at Margalla hills by 23-5-2019, positively.  He also directed the MCI to get short code helpline so that people may have an easy access.  The Federal Ombudsman also directed to launch an aggressive awareness campaign for the sensitization of the nearest inhabitants.